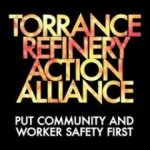 On the five-year anniversary of the Torrance refinery explosion, the Torrance Refinery Action Alliance (TRAA)  announces a new campaign urging Governor Gavin Newsom to request Atty. Gen. Xavier Becerra’s office to investigate — based on newly available irrefutable evidence — the lack of basis for two legal processes that allow the Torrance Refining Company and Wilmington’s Valero Refinery to use massive amounts of hydrogen fluoride that imperil the surrounding communities.

The campaign will be kicked off with the delivery of the letter below from the six-member TRAA Science Advisory Panel  to  Governor Gavin Newsom on Tuesday, February 18, 2020 — the 5th Anniversary of the February 18, 2015 Torrance Refinery Explosion. It will continue over the next several months with TRAA enlisting elected officials of the affected region, city and neighborhood councils, community organizations, and members of the community to add their voices to call for an investigation. TRAA will continue to inform the public of the danger posed by the refineries and the deceptive information and science that they continue to disseminate. The TRAA Science Advisory Panel will stand by to assist Atty. Gen. Xavier Becerra’s Staff in the investigation.

The full realization of the hazard of hydrogen fluoride (HF) as an alkylation catalyst in refineries happened in the 1987 Nevada HF release tests conducted for Amoco by Lawrence Livermore National Laboratory under the direction of Dr. Ronald Koopman. The results surprised and shocked the engineering community — 100% of the HF liquid released under refinery conditions formed a ground-hugging cloud of aerosol and vapor. None fell as liquid to the ground. Watch Dr. Koopman’s illuminating presentation to the AQMD Refinery Committee.

The refineries’ primary response was an additive they relentlessly and falsely claim results in the majority of an HF release falling to the ground, in spite of the fact that the additive has to be kept at such a low level it is ineffective.

Over the last three decades, in a David-and-Goliath struggle between the innovation of transitioning to a vastly safer alkylation catalyst and the South Bay refineries’ clinging to the status quo — hoping a calamitous event beyond their control won’t release their store of HF into the community — the refineries have won at every turn: 1) the 1989 Walker Initiative, 2) the 1990 Torrance lawsuit settled in a consent decree allowing the Torrance refinery to use HF, 3) the original 1991 AQMD 1410 Rule overturned on a clerical error, 4) the AQMD/Ultramar MOU allowing Valero to use HF, 5) two bills in the State Assembly that died in committee, and 6) the recent collapse of the second AQMD Rule 1410.

Innovation at loggerheads with the status quo is a subject of the celebrated book Men, Machines, and Modern Times by Elting Morrison (1909–1995), renowned Professor of Science and Technology at MIT. The book, based on a series of famous lectures Morrison gave at Caltech, sets out a road map for progress illustrated by a case study of an innovation around 1900 that greatly increased the accuracy of guns on U.S. Navy warships and the Navy’s opposition to it. The innovation/status-quo deadlock was broken in favor of innovation only when the issue was elevated to a higher level of authority, Theodore Roosevelt, the President of the United States at the time. TRAA won’t be elevating the HF issue to the current holder of the office of President. Instead, TRAA is elevating the issue to the informed leadership of Governor Gavin Newsom and Atty. Gen. Xavier Becerra.

The Letter to Governor Newsom

The Torrance Refinery Action Alliance (TRAA) applauds your leadership in asking Atty. Gen. Xavier Becerra’s office to investigate whether California’s oil and gas suppliers are involved in price-fixing or other unfair practices, as reported in the Los Angeles Times.

There is, however, a far graver concern that needs to be investigated. On this five-year anniversary of the Torrance refinery explosion, we urge you to request an investigation of how, over the last three decades, two refineries in Southern California’s South Bay — the Torrance Refining Company and Valero in Wilmington — have been allowed to use massive quantities of hydrogen fluoride (HF), one of the world’s most dangerous industrial chemicals.

The TORRANCE REFINERY ACTION ALLIANCE (TRAA) announces a Press Conference and a Community Call To Action for the 5th anniversary of the Torrance Refinery explosion. The event at the Doubletree Hotel in Torrance on Saturday, February 15, 2020 from 9:00 to 10:00 a.m., will include speakers, short TRAA-produced videos, and an announcement of a major new campaign to mandate that the Torrance Refining Company and Valero in Wilmington — the only two refineries in California that use HF — transition to one of the modern, vastly safer processes.

See the event “Save The Date” flyer by clicking here.

Video of the 1986 “Goldfish” Release Test of hydrofluoric acid (HF), one of the world’s most dangerous industrial chemicals, shows the formation and spread of a ground-hugging toxic cloud. In the test carried out by Lawrence Livermore National Laboratory research scientist Dr. Ronald R. Koopman, 8,300 lbs. of HF were released within 2 minutes. 100% of the acid became airborne in a dense, ground-hugging cloud of deadly HF. Two miles downwind, the HF cloud had more than twice the lethal concentration. Consider that each of the two settler tanks at the Torrance Refinery holds 50,000 lbs. of HF — six times more than the 1986 “Goldfish” Release Test.

Compare these “Goldfish” test results to the large-scale accidental release of the vastly safer alternative sulfuric acid at the Tesoro Refinery in Martinez, California, on February 12, 2014.

While the Torrance and Wilmington Valero refineries use Modified Hydrofluoric Acid (MHF) with 6-10% sulfolane to reduce volatility, the amount is far too little to prevent a toxic cloud, a fact that has been confirmed by the AQMD.

Click the image above to watch the video and click the title below to read the 1988 Los Angeles Times article on the test:
Experts Warn of Lethal Risk Posed by Acid in L.A. Refineries

Steve Goldsmith of the Torrance Refinery Action Alliance said air board members “caved into the pressure by the oil industry” with a decision that “leaves South L.A. County residents exposed to catastrophic danger.”

Air quality regulators on Friday killed a years-long push for stronger regulation of a dangerous acid used at two South Bay refineries that has frightened many neighbors, voting instead to accept a voluntary, oil industry pledge to enhance safety measures.

The decision by the South Coast Air Quality Management District governing board came just one week after the two refineries, in Torrance and Wilmington, offered a way to avoid tougher restrictions. They sent letters offering to install improved safety systems in the coming years if regulators ended their pursuit of a rule or agreement to reduce the risk of a catastrophic release of modified hydrofluoric acid, also referred to as MHF.

On June 21, 2019, a major process loss of containment caused a fire and explosions at the Philadelphia Energy Solutions Refining and Marketing LLC (PES) Refinery in Philadelphia, Pennsylvania.

PES estimated that 5,239 pounds of hydrofluoric acid released
from piping and equipment during the incident. . . . Dr. Ron Koopman, Lawrence Livermore National Laboratory senior scientist (retired),  said the HF that was released at PES was likely dispersed by the intense explosion. “The explosion is nasty — it could kill people, but it’s not the principal hazard. It’s the toxic gas [HF] that could continue to be toxic downwind. Sometimes, the explosion and the fire is your friend.”

A piece of pipe, long overdue for replacement, spilled highly combustible hydrocarbons mixed with a dangerous chemical and caused the devastating explosions and fire at the Philadelphia Energy Solutions refinery in the early morning of June 21. One explosion sent a 38,000-pound vessel — about the same weight as a firetruck — across the Schuylkill River, where it landed on the waterway’s banks, near the company’s tank farm. PES estimates the incident released about 676,000 pounds of hydrocarbons, most of it — about 608,000 pounds — burned in the fire and explosions.

“PES had a policy that any pipe thinner than 0.18 inch would be replaced. The Chemical Safety Board’s investigation found that the ruptured pipe was only 0.012 inch thick [the thickness of three sheets of copy paper] — less than a tenth of the thickness that would have triggered a replacement.”

Those are some of the details in a report released Wednesday by the federal Chemical Safety and Hazard Investigation Board. The report also says an estimated 3,271 pounds of the dangerous hydrofluoric acid was released into the atmosphere, while the refinery’s water spray system contained about 1,968 pounds of HF. The release of the chemical did not cause any injuries. City officials had previously reported they did not detect any HF escaping.

“How many times do we try this before we actually get a release that kills 1,000 people? . . . People should never have been allowed to live this close to these refineries. It’s just unconscionable to have allowed that to happen.”
~ Dr. Ron Koopman, conductor of the 1986 “Goldfish” hydrogen fluoride release tests in the Nevada desert

In the predawn hours of June 21, explosions at the Philadelphia Energy Solutions refinery in South Philadelphia shook houses, sent fireballs into the air and woke up nearby residents.

“Three loud explosions, one after the other, boom, boom boom!” says David Masur, who lives about two miles from the plant and has two young kids. “It’s a little nerve-wracking.”

Masur watched as the refinery spewed black smoke above the city, easily visible from his home. But what he didn’t know at the time was just how close he and his family came to getting exposed to hydrogen fluoride, one of the deadliest chemicals used by refiners and other industrial manufacturers.

A Rule 1410 Performance Standard to Protect the Community

Two of the World’s Leading HF Experts Answer the $64,000 Question: “Does MHF behave the same as HF?”

AQMD Board Member Janice Hahn Speaks at the February 1, 2019 Meeting

ToRC Misinformation in Postings about MHF by George Harpole, Ph.D.

Superheated MHF Excluded from the Only Large-Scale Test Series

Flash Atomization of HF and MHF by George Harpole, Ph.D.

“Is a phase-out of dangerous chemical used at Torrance, Wilmington refineries getting closer?” – Daily Breeze

TRAA Video – Are schools prepared for a Chemical Release?

“Who is telling the truth about the Torrance refinery?” – TRAA Science Advisory Panel opinion piece in the Daily Breeze

The Sabotage of the Torrance-Mobil Consent Decree by Sally Hayati, Ph.D.

TRAA Video – The historic FAILURE of MHF in the Torrance Refinery

A Fatal Flaw in the Consent Decree

“Developments in the debate over hydrofluoric acid” – Daily Breeze

TRAA Video – The refineries CAN afford to prioritize safety over profits